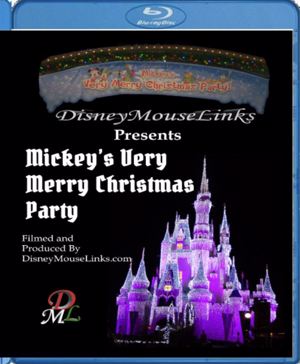 The three shows contained on this DVD were filmed at the Magic Kingdom in December 2013 from the Central Plaza in front of Cinderella Castle. They are not intended to be a replacement for seeing the shows in person...a video cannot replace the grandeur of being immersed in the middle of Mickey's Very Merry Christmas Party.Mickey's Once Upon A Christmastime Parade is a Christmas Parade full of Disney's much beloved characters from many of Disney's films. Some characters remain on their floats while others walk around greeting the crowd of fans enjoying the parade. In addition to the familiar Disney characters there are gingerbread men, dancing snowflakes, oversize toys and of course Santa and his reindeer. The soundtrack for this fun parade is a nice mix of familiar carols with some original Disney music.Holiday Wishes - Celebrate the Spirit of the Season is an exquisite high tech fireworks display choreographed to familiar Christmas Music. You will see colorful fireworks over Cinderella Castle with the Castle playing an integral part of the show. The fireworks are hosted by everyone's favorite conscience, Jiminy Cricket. You will hear music from the Nutcracker, Babes in Toyland, and other well known Christmas Music. Another favorite Disney character can also be seen flying through the sky's at the Magic Kingdom during this wonderful fireworks display.The Celebrate the Season show at Cinderella Castle uses the vast stage in front of the castle to produce a beautiful Christmas show. Watch dancing packages, a Christmas Carol filled soundtrack and a star studded cast of Mickey and Minnie's friends as Mickey gives Minnie a Christmas gift. Beautiful dancing and a sing along help make this beautiful show a must see.

An error has occurred. This application may no longer respond until reloaded. Reload 🗙